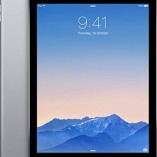 Design So capable, you won’t want to put it down. So thin and light, you won’t have to. The ?rst thing you’ll notice is how incredibly thin and light it is. iPad Air 2 is an impossibly thin 6.1 millimetres, making it our thinnest iPad ever. And it weighs less than half a kilo. So it’s even easier to hold in one hand and take with you anywhere. Ingenuity makes it thin. Aluminium makes it strong. When it was introduced four years ago, the original iPad set the standard for thinness and lightness. Since then, iPad has become even thinner and lighter. But thanks to its durable aluminium unibody, iPad Air 2 doesn’t sacri?ce strength in the pursuit of thinness. From the moment you pick it up, you feel how sturdy and rigid it is. Not just a thinner display. A better display. The displays on previous generations of iPad used three separate components. iPad Air 2 changes all that, combining those three layers into just one. This eliminates gaps between layers, along with the internal re?ectance caused by those gaps. The result? Colours are richer, contrast is greater, and images are sharper and more vivid. Your content, at your ?ngertips. The LCD layer is now closer to your eyes (and your ?ngers), And we’ve improved the sensitivity of the screen, so it tracks your finger even more accurately when you make quick gestures. Which means everything you do – playing games, sur?ng the web, enjoying photos and videos – becomes more personal, immediate and immersive. The lowest re?ectance of any tablet. iPad Air 2 features a custom-designed anti-reflective coating that reduces glare by 56 per cent, making it the least re?ective tablet in the world. In virtually any kind of environment – o?ces, classrooms, outdoors – everything is clearer and more readable. Massive power. In its most minimal form. And all your actions – swiping, It’s also extremely power efficient, with up to 10 hours of battery life.
Apple iOS 8; 9.7-Inch Retina Display; 2048×1536 Resolution
A8X Chip with 64-bit Architecture; M8 Motion Coprocessor
8 MP iSight Camera; FaceTime HD Camera
Up to 10 Hours of Battery Life

There are no reviews yet.